Many of you have followed Asher’s story. In my writings I said that it was Lindsey’s story to tell and she would talk when she’s ready.

Well, she’s ready. It’s beautiful…full of hope…an example of courage in the midst of horrendous circumstances. I have not changed or added to any of Lindsey’s words. They are directly from her.

I know she would appreciate your comments and sharing with others who could be positively impacted by her story and Asher’s life.

“As Joy so beautifully and eloquently wrote, my son Asher Knox, has a story. Our family has a story because of this miracle baby. Anyone who met our sweet precious boy, has a story…like Joy does. It’s because most people can’t tell stories of angels because they never meet one. I grew one inside me for 35 weeks and 3 day.

I will not go into the 9 months of details, but what I will share is that my husband and I found out when I was 15 weeks along , that Asher had a form of Skeletal Dysplasia—aka dwarfism. Since it was caught so early on, the many doctors I saw were confident that it was a lethal form…meaning IF Asher made it to term, he would not breathe and would die very shortly after birth. We were given the choice to terminate at that point, which is an awful place to be for anyone…PRO CHOICE or PRO LIFE. You are deciding the fate of your child to a certain degree at that stage.

I was never one of those people who voiced their opinion on PC vs PL as I figured I would never be in that position and I could see arguments for both sides. However, when it came down to it, we felt that if God didn’t want us to have Asher, then why allow us to conceive him? If he was not meant to be, God would end the pregnancy at some point but we could not bear the thought of stopping our child’s heart by choice. If he were to go, it would be when it was his time.

Fast forward to May 26, 2013 when I gave birth to the angel inside me. I had no expectations but hopes that I would be able to hold my son and have him look at me long enough to know I was his Momma. I got that moment. I got not only that one but 23 hours and 45 minutes of moments. Each of those seconds I spent with Asher were not filled with tears, but of hand holding, hair smelling, belly kissing, storytelling, and more cuddling and group praying than I can count. Because of Asher, my husband, Asher and I were able to feel more love from family, friends and strangers than I could EVER begin to imagine. We felt very blessed and still feel blessings entering our lives each and every day.

Yes, I said BLESSED. You may be thinking, “Why does this woman feel blessed if she carried her child to term, only to say goodbye less than a day later?” That’s just it. I had a day. Actually I had almost 36 weeks of enjoying ultrasound photos and kicks and somersaults. I got to watch my belly get bigger every week. I was able to be a MOTHER. How many people never get that opportunity? I truly believe there are many women out there that cannot get pregnant or carry their own child, and if given the choice, they would take 24 hours versus nothing. 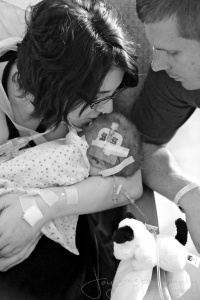 To quote my favorite movie Steel Magnolias…..”I would rather have 30 minutes of wonderful than a lifetime of nothing special.” I have watched that movie easily 75 times in the past 20 years. How ironic that that quote would be something I would experience and believe myself when my son was created.

So what is life like now after Asher left to fly with the angels? It is tough, no ifs, and or buts about it. Actually tough is a kind way of putting it. Grief is a feeling that cannot be put into a definition properly. It consumes you at certain points. It hits you when you least expect it. Just when you think grief has left the building, it becomes the act on the main stage. I miss my buddy, every single second of every day.

Never would I have thought I would welcome the heartburn, the painful feeling of pressure from him pressing on my organs, the Gestational Diabetes and pricking my finger 4 times a day. That sounds like bliss because HE was with me, safe and sound.

I realize there will be no rocking to sleep, no report cards, no chances for me to leave notes in his Toy Story lunch box. My husband and I will miss out on teaching him to ride a bike and kiss booboo’s. No homecoming dances, no first haircut, no cliche Easter bunny and Santa Claus pictures. That’s the stuff that hurts the most~the things not only we, but Asher will miss out on.

I know I will see him again and that he is waiting patiently for us. This life is temporary and I am comforted knowing that at the end of the day, I have an angel baby that I will spend eternity with. I would never have that opportunity if we didn’t choose the road less traveled….carrying to term.

Again I say, I AM BLESSED. Everyone has darkness in their lives, but there is also light. You just have to look for it …or be open to it. My darkest days did not kill me. They may have knocked me down and I still have to take it one minute of every day at a time. But I choose to be happy. I choose to honor my beautiful son Asher by not seeing his life as a tragedy or one that has ended.

His story is just beginning. And so is mine.”

3 thoughts on “Twenty-four hours with Asher”