“There is only one God and He is God to all; therefore it is important that everyone is seen as equal before God. ~Mother Teresa

“…red, brown, yellow, black and white, they are precious in His sight…”

Do you believe that we all start out with the same deck of cards (so to speak)?
The same possibilities…chances…hopes…dreams? We have the same beginning but with vastly different endings?

OR, do you believe that before we are ever conceived, our fate has been decided?

Would God really assign one child to a crack addicted girl while giving another to someone who has dreamed of being a mother for years?

Or what about an alcoholic woman, who, every time she goes to the bathroom prays (to whoever is there) that she will see blood in the toilet as a prerequisite for a miscarriage, mainly because she doesn’t know who the father is. And let’s be honest…she isn’t giving up the booze.

I have heard the following phrases and those similar (as I’m sure you have too),
“Well, we work with the cards we are dealt”
“But for the grace of God go I”
“Worthless drunk. Why can’t he/she just pull it together. It’s lack of discipline I tell you!”
“How could anyone just give up their baby?! Wow, are they going to be sorry later!”
“They obviously chose the short straw.”
Maybe I have used a few of these phrases. YIKES. The thought of it coming out of my mouth makes me cringe.

“Be kind, for everyone you meet is fighting a difficult battle.” ~Plato

My man and I were in a certain part of the city today.
It was fairly early for a Saturday.
As we sat outside enjoying the beautiful weather, one homeless person after another came into the  park across from where we were.

I watched them with their packs of belongings, their dogs on the end of a thick string and their feet black from walking either barefoot or with worn sandals.

There is a couple that stood out to me. I watched them for a while.
He looked to be comforting her over something.
I watch him approach a passerby. I figured he was asking him for money. To my surprise, he had asked for his to go box that was in his left hand.
The man gave it to him and quickly walked away.

He then took it over to the woman that he was seemingly consoling and gave it to her. She opened the styrofoam container and ate the left over contents from the strangers meal.

“Make us worthy, Lord, to serve those people throughout the world who live and die in poverty and hunger. Give them through our hands, this day, their daily bread, and by our understanding love, give them peace and joy.” ~Mother Teresa

I see the same man walking up Peachtree on my way to work everyday.
And on my way home he is walking in the opposite direction.

I always notice his mannerisms…the way that he hangs his head when a suit walks by or when a woman crosses to the other side of the street to avoid his stink and stare…
The fact that he is always scratching his thickly bearded face.

All the while, conversing in my head, “He probably has head lice and there is no telling what’s living in that beard? I wonder how long it’s been since he’s had a shower? Where does he use the bathroom? I wonder if he even wants help? I can only imagine how bad his body odor is…Why doesn’t he go to a shelter? He probably has to eat out of dumpsters. I wonder if I could ever do that?! People seem to look right through him as if he is not even there. Is that hurtful to him, or has he grown accustomed to it? I wonder how long he’s been on the street?”

I see him walking as if his left leg is shorter than his right. His skin has leathered from the elements and his hair is almost white with spots of grey.

I wonder who he was? I wonder how he became what he is? I wonder if he had a family and a life? A house with a two car garage and a front lawn that he had to mow once a week.

I wonder if he has children somewhere who no longer speak to him?

I wonder if he prays?

I wonder if he feels inadequate and beaten down? I mean, how could he not? 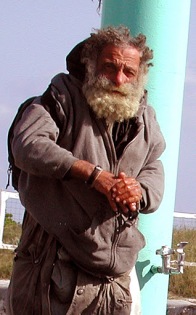 The first day I remember seeing him, I was driving down Peachtree and came to the stoplight, there he was, walking down the sidewalk. “Oh Lord, please don’t let him ask me for money! Please. You know I will give it to him and it is probably to support whatever habit he has.” I avoided eye contact. You know the kind, when someone in utter desperation looks at you and if you are looking at them, you are now involved somehow.

“Don’t look. Just look straight ahead. Good Lord! Is this the longest stoplight in Georgia?!”

I couldn’t help it, I had to look back over to my right where he was walking.

My eyes met his. They were the most beautiful blue eyes I had ever seen, with lines as deep as valleys encasing them.

He didn’t smile…he did not approach my car and ask for money…he just kept walking.
“If you judge people, you have no time to love them.” ~Mother Teresa

Just then I heard the car horn behind me…the light was green.

As I drove on, all I could hear in my head was a quote from Mother Teresa saying, “They are all Jesus in disguise”.

I was shaken. I was…changed.

I began looking for this man every morning and afternoon on my commute.
What is his name? Does he go to a shelter? Does he reside under a bridge? Is he mentally stable?

“Lord, WHAT DO YOU WANT ME TO DO WITH THIS?! Why is this person in my path everyday? More than once? I do not know what I am supposed to do with this?! But I know I can’t simply do nothing. I can no longer turn my head and look the other way.”

Besides, that could be me…

“Nah, banish that thought! Put it out of your mind!”

No really, I wasn’t too far from where he is and I certainly deserved to be eating from dumpsters without a bed to sleep in or a roof over my head.

I’m guessing that when he was little he didn’t dream of one day living on the street. Calling a bridge under I-85 “home sweet home”. I seriously doubt that he saw himself walking around the polluted city streets for hours a day in a sweat stained wife beater and hole filled jeans, while carrying everything he owned in a pink backpack.

I think he dreamed of being something more.

I don’t know? Maybe it was the cards he was dealt? Maybe he’s unlucky? Maybe his destiny was always to be that of a homeless wanderer?

Maybe not! Maybe someone just like me, at another place and time, before things got so bad, passed him by…looked the other way…figured someone else would help him?

“You and I, we are the Church, no? We have to share with our people. Suffering today is because people are hoarding, not giving, not sharing. Jesus made it very clear. Whatever you do to the least of my brethren, you do it to me. Give a glass of water, you give it to me. Receive a little child, you receive me.” ~Mother Teresa

Do you know what I love and adore about Buckhead Church, my church (with no steeple)? I LOVE that I am constantly challenged to BE THE CHURCH. I am encouraged to BE BOLD. I don’t wait for God to meet me in a building on Sunday, I seek and walk with Him daily. Do you know how powerful that is?! That is a truth that I did not accept until I was 3 decades into my life.

I know that it’s easier not to look or listen or…notice, but I beg you…please…open your eyes.
Or better yet, ask for a new set of eyes. My prayer is, God, Give Me Your Eyes and then help me do something with what I have seen and not worry about what other people think of me. 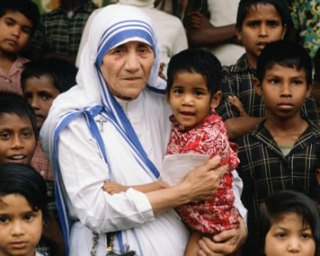 4 thoughts on “Are all of God’s Children Created Equal?”