The other day I was driving down a road I have driven down everyday (at least once) for the last 5 years. I always glance to my right and say to the boys, “How many ducks can you count on the water?”

This day was no different. We all looked out the window at the pond. The fog was sitting just on top of the water’s surface. The boys debated over the number of ducks they saw as we drove on to school.

I dropped them off and instead of going the usual route home, I mixed it up a bit and went back the same way I came. (I’m wild and crazy like that sometimes.) As I drove past the same lake I was surprised by how much the view had changed in such a short time. The transformation was remarkable.

I debated pulling over and quickly realized that the photographer in me could not resist capturing this moment, freezing it in pixels and sharing it with you while shouting at the top of my lungs, “LOOK! THERE HE IS!!! HE KNOWS MY NAME! HE CARES! HE SEES ME!”

I pulled over by the baseball fields across the street. All I had on hand was my phone and I wanted to get as much of the splendor in the frame as possible. I walked to the yellow line in the road…in my bare feet, pajama pants, over-sized t-shirt and no bra. (I tell you this detail because normally it would be the one thing that would keep me from getting out of my car and stepping onto a public street during peak carpool hours.) I couldn’t help myself. I raised my phone and attempted to freeze time. (For those of you judging me for going bra-less in the carpool line, what can I say, I’m a risk taker.)

As I lowered my arms and turned to walk back to my car (that was illegally parked) I realized that traffic was stopped both ways. There were only a couple of cars on either side, and I justified my temporary traffic jam by rationalizing that my seemingly asinine behavior may be the only thing that allowed them to pause long enough to see the beauty of the sunrise. (At least they got a good laugh at the lady on the yellow line, still in the clothes she had slept in the night before, with her “camera phone”)

This is what I saw… 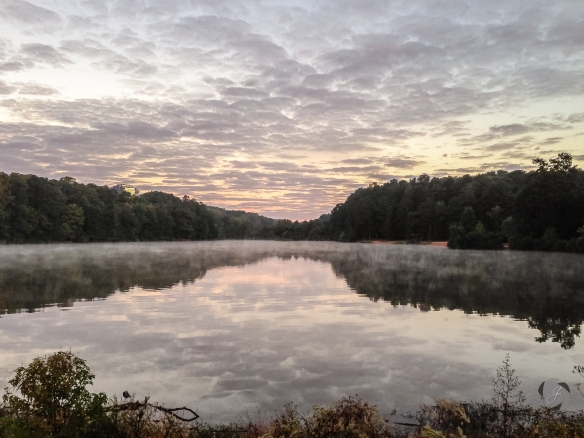 Friends, may I just tell you, this picture does not even begin to do the scene justice.

That’s what beauty does.
It shows up in the most ordinary places…when we’re not ready…when we don’t have make-up or heels on and all we have is the camera on our phone. For me, it shows up around the time I am wrestling with God. Around the time I am asking him to show me who he is and what I am to him. It happens when I am questioning my faith and what I know, in my soul, to be true.

I don’t know what giant you are facing in your life right now and you don’t know mine, but one thing that is true for both of us is the vastness of possibilities that come with faith in our Creator.

The same God who decided which colors he would use in the sunrise this morning hears my pleas and petitions. He accepts my praise and thanksgiving. And just when I need it most, he renews my weary mind and sets meaning to the phrase, “It is well with my soul.”

What about you? When was the last time you were captivated by astounding beauty in the everyday? Did you stop long enough to recognize, acknowledge and relish it?

Keep up with the latest…

Thank you for stopping by!

In the rearview mirror